I had the opportunity to give the presentation Seven Personality Types of Software Developer twice so far. The presentation is based on my previous post. First of all, the session was surprisingly very interesting for developers. Despite its soft nature, I have received a lot of feedback from the audience during and after the session. The whole idea of categorizing developers by their personality type seems to be hot. 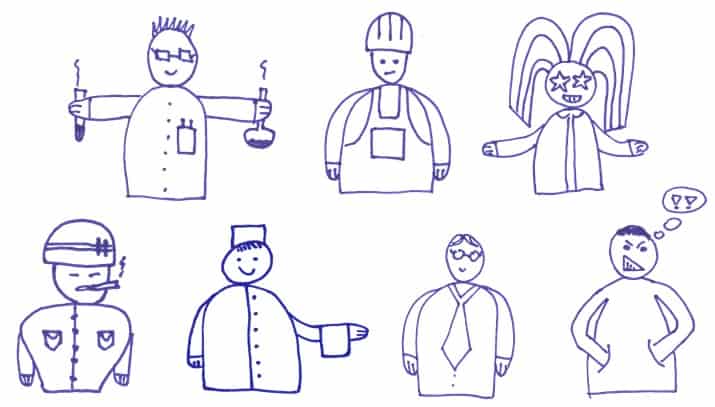 So far the only visible changes are in types naming and hand-made avatars:

As you may notice the names are more elegant and shorter now. Thanks to my innovators who came with more suitable words :)

You probably noticed the drawing above :) This is an initial idea of giving a human face to the theory :) I hope the icons are good enough to express the rest... at least for version 1.2. If you know a talented graphic designer - contact me. I will be interested in creating more production-ready vector-based avatars.

Initially, I thought that types will not overlap at all. As the idea crystalized more and more, the overlapping became more obvious and even natural. The last proposal of types overlapping is presented here, but I believe this will change even more in the future. The trigger was that some people approached me after the session and claimed that they have celebrity and coach skills. At first, it felt strange to me, but probably I'm wrong. This requires more research!

If you feel you have some input feel free to write me an email. This project will be big! More to come :)